So when I last left off, we had just finished up a leisurely day of eating and drinking and soaking up some culture. The day was terribly long you see, so we decided to sleep in as long as possible. Like 1 pm long (hey, it’s vacation!)… When we realized the time, we threw on bathing suits and headed down to the beach for some more relaxation.

A typical thing on public beaches are vendors. They sell everything from ceviche, to massages, to bracelets, and sunglasses. They can smell a gringo a mile away, and boy did they smell Tyler! 😉 Within 2 minutes of renting our hut for the day, 2 local ladies sashayed over to us full of flattery and jokes and charisma, despite my pleas for us not wanting beach side massages. Some how we found ourselves getting our feet rubbed because we had “good energy” (aka they suckered us). Who wouldn’t want a massage on the beach, right? The issue is that as soon as one vendor catches you giving in, they think you’re an easy target for more! I was so preoccupied with telling other vendors “no, gracias”, I couldn’t take any pictures or enjoy my massage. Very unfortunate.

Luckily, our host brought us some Coco Locos (rum in a coconut!) and beer.

We decided it was probably irresponsible if we didn’t eat our way through our mini vacay so I ordered us one of my favorite meals ever: Pargo rojo con arroz de coco y patacones. (Fried red snapper, coconut rice and fried plantains)

This was me really loving the pargo…. (no, I didn’t eat the head)…

It got way too windy out there so we packed up and headed back to our hammocks for a couple pre-dinner siestas. A busy day deserves a nap!

We woke up just after sundown and got ready for dinner at La Cocina de Soccoro. Apparently there are two in the city and we ended up not going to the original (like my uncle had suggested), but it was a cool place none the less. This rustic feeling place is a great place to try some local dishes without feeling nervous. We were both feeling steak, so I ordered the “Pot Roast Cartagena”: pot roast, potato salad, coconut rise, and sweet plantains in a rose sauce. 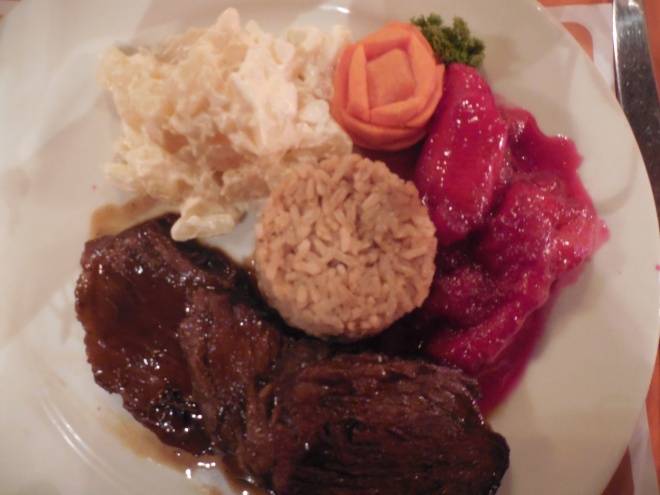 The rose plantains were a bit like eating perfume (I prefer mine to be a little less sweet) and the potato salad was very mayo-y. The meat and rice were delicious though! Tyty ordered the most massive steak either of us had ever seen and it was cooked perfectly! I forgot to take a picture so here is a pic of Tyty post dinner instead… 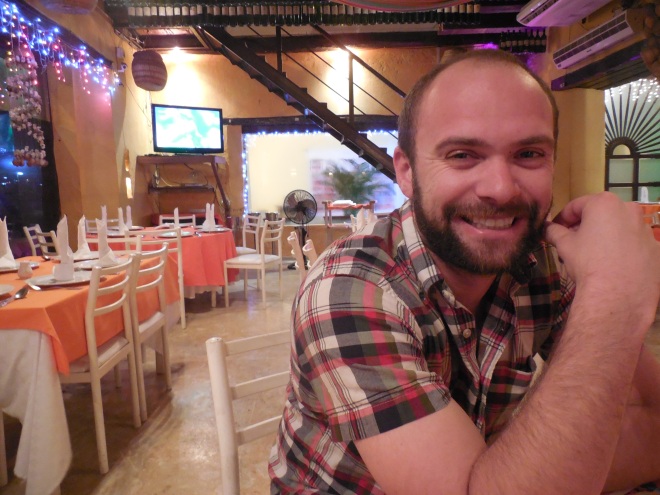 It was a Tuesday night so the scene was a little empty, apparently its usually a popular spot. Our server (who looked exactly like Barack Obama) recommended great dishes, but the service was a bit slow—that might just be the coastal pace of life though. The prices were decent (~30,000 pesos/16ish dollars per plate) and they definitely don’t let you leave hungry. The portions are huge!

We rounded out our night with more drinks and Spanish language music videos on the terrace.

The next day was our last day, but again we decided eating was the best idea. The maid, Sila, is one of the best cooks in Cartagena, so we had to have a lunch prepared by here at least once! By the time we woke up, she had Arepa y Huevo waiting for us! (Think a thicker tortilla like thing deep fried, filled with an egg and meat)… heaven on earth. It was so humid that day that my camera was a little foggy…

After that I took a hammock selfie and then napped until lunch. (Clearly, I’ve been in desperate need of a WiFi-less getaway and some sleep…)

Now here is the real deliciousness… When I woke from my nap, Sila had prepared my favorite meal (again, pargo rojo con arroz) but I must say, this one was 1000x times better than the one we ordered on the beach. The coconut rice was sweet but also a little tangy with raisins and the fish was super fresh and meaty. I don’t know that I’ve had a better meal. Especially because it was enjoyed on a sunny terrace with great company! 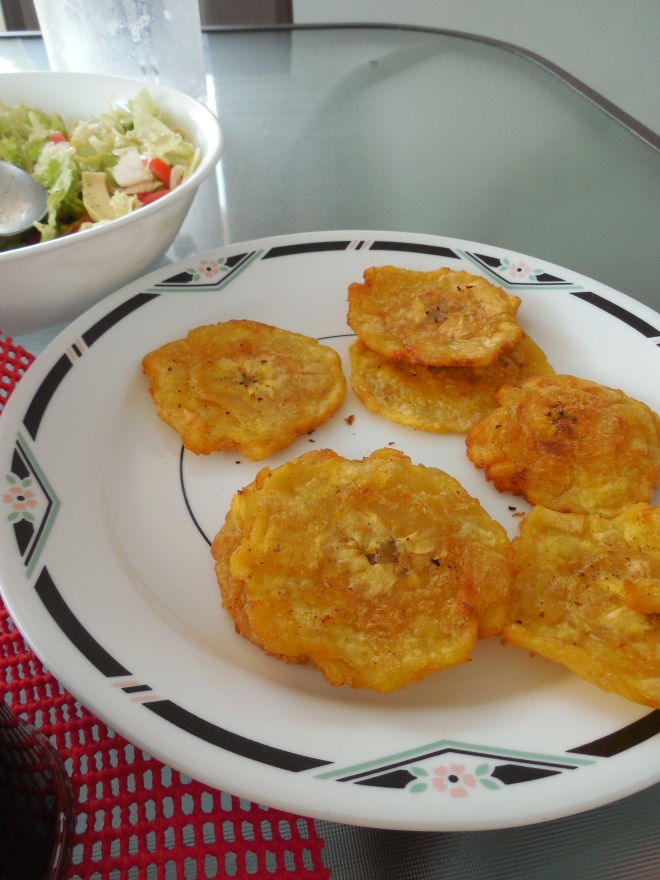 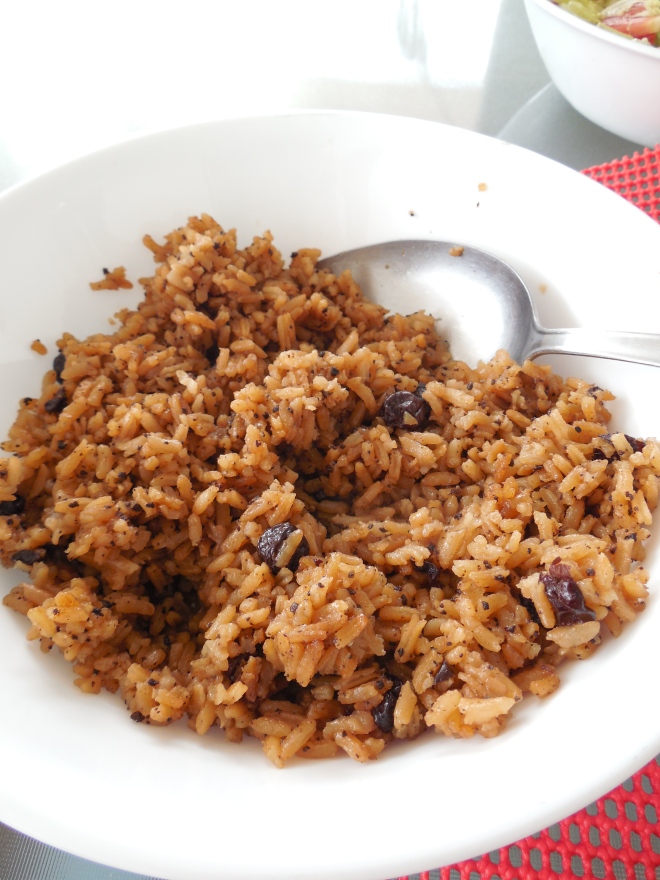 Our last couple hours were spent in the Old City, shopping for gifts and enjoying some beers outside a cafe under the twilight. 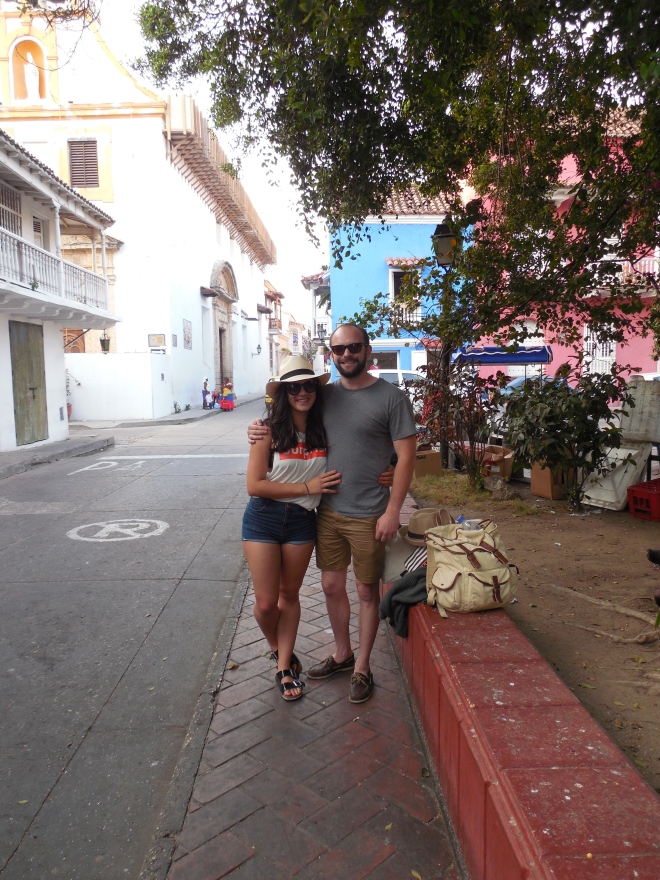 The entire city is magical and takes you back to simpler times. If you’re planning a trip to Colombia, then Cartagena is a must! There are a number of 5-star romantic-feeling boutique hotels within the city, but backpackers or budget travelers can find some great hostels inside and outside the city. It’s very tourist friendly, and you’ll find people from all over the world there. I must warn you: DO NOT DRINK THE WATER FROM THE TAP/DO NOT EAT VEGGIES OR FRUITS WASHED WITH TAP WATER/CEVICHE FROM ANY OLD VENDOR. And I’ll leave it at that!